A few months ago we lost Denny Griffith after a two year battle with cancer.  I wrote a rather lengthy piece on Denny and what he meant to me (for those who don’t know, Denny was president of CCAD while I was at graduate school there).  I was still writing and editing this piece when my computer fatally crashed; I don’t know if/when I’ll resume the process (see previous blog post).  I will say here that Denny meant a lot to a lot of people, and I was lucky enough to be one of them.  He did much for the arts, especially in Columbus and particularly for the improvement of CCAD.  But he was also a cool guy to know and had an impressive art practice;  I think I probably warmed up to Denny quickly partially because I knew he was a fellow painter.

Denny was the first person to congratulate me at the commencement ceremony (he was also the speaker) for the class of 2012 (pictured below).  We were the first class of MFA students at CCAD to graduate. 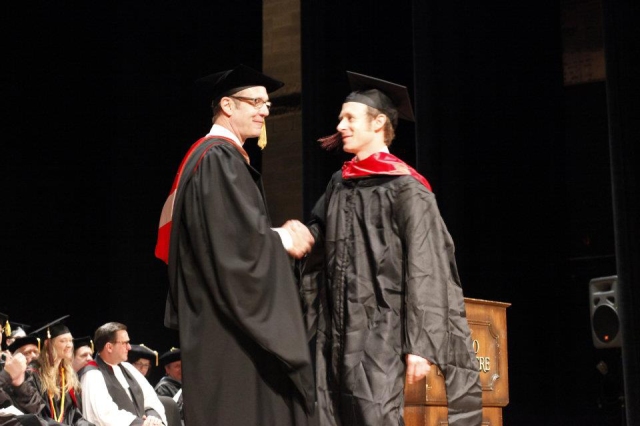 What I didn’t realize then was that the MFA program wouldn’t have existed if it wasn’t for Denny.